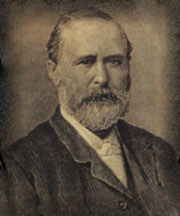 The son of a Philadelphia hat maker created the first cowboy hat in 1865. His name was John B. Stetson, now known as the inventor of the cowboy hat. As the story goes, John B. Stetson and some companions went west to seek the benefits of a drier climate. During a hunting trip, Stetson amused his friends by showing them how he could make cloth out of fur without weaving. Stetson used the fur from hides collected on the hunting trip. Kneading the fur and working it with his hands, dipping it into boiling water, spreading it out, kneading it, and dipping it again, he created a soft, smooth piece of felt. Using a technique that has been known since the beginning of modern civilization, Stetson amazed his friends by using the only material he had at hand—fur. Stetson made an unusually large hat out of this fur-felt. He then wore the hat for the remainder of his hunting trip, at first as a joke, and then grew fond of the hat for its protection from the weather. He and other cowboys of the west ended up liking the idea so well that Stetson soon manufactured and sold a hat true to his original idea. Since his hunting trip, J.B. Stetson intended his new hat creation to be for the cowboys that he came to know in the west. Thus, the creation of the first cowboy hat…character and sun block for the men of the west!

Why Hats Were Worn 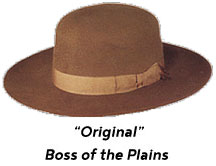 “Today, while there are many manufactures involved in making both inexpensive wool and machine blocked hats, as well as custom manufactures making hand creased MAGIC, the basic hat remains the same. Its function continues to protect its wearer from the blistering effects of the sun and the tortures of wind and rain. While some of today’s hats remain true to their turn-of-the-century beginnings and others follow their own design features, today’s cowboy hat continues to be seen as the last vestige of apparel of a young and untamed nation. Every hat makes a statement about the tough individuality at the center of every pioneer that carved a life from the new frontier,” says Ritch Rand. 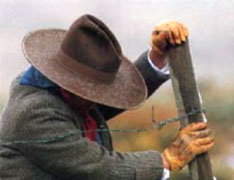 The cowboy hat was a regular and necessary part of the cowman’s daily wear. The wide brim made quick work of fanning a fire. It could be used to whip a horse, wave to distant riders, and yes, even lend an air of grace and prestige to the man beneath its brim. And, of course, during inclement weather, the cowboy hat served as a very effective umbrella or sunscreen. 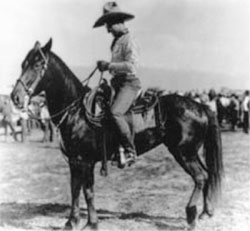 In addition, there came to be a kind of code to the particular style, shape, and size of the cowboy hat. While it remained a universal image of the American West, certain nuances in shape, size, and style provided specific information of the wearer’s background and geographic base. With a subtle adjustment to the brim and a couple of extra dents in the crown, a man could indicate that he was from the northern regions of Nevada or the rough plains of Texas, the wind-whipped ranges of the Rockies or the low deserts of New Mexico.

Making of the Hat 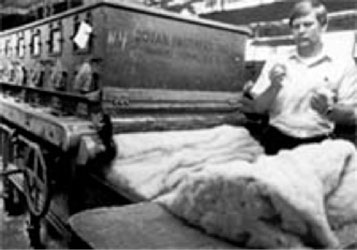 We begin with the specific material desired to create the hat — in nearly every case, fur felt. Felt differs from every other fabric in that it is made of thousands of short, single, animal-fur fibers, which tend to twist together when kneaded and manipulated in hot water and steam. Felt can be made into the smoothest fabric known (due to the interlocking action of the fibers) and the lightest fabric known (in relation to its tensile strength), because a minimum of fibers are required to create the necessary toughness. These factors also make felt on of the most resilient of fabrics and one of the fabrics most impervious to water, due to the close, interlocking fibers and the fact that animal fibers themselves do not soak up moisture. Felt hats can be made of either fur felt (mid to high price range) or wool felt (low price range). The best and most durable hats are made with fur felt, which is composed primarily of rabbit fur or beaver fur. Some hare fur is used to make better hats. (Nutria is a South American animal similar to a large vole or small beaver.) 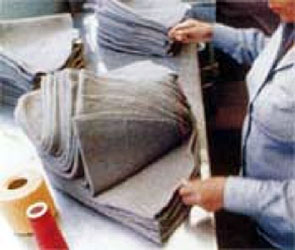 Once the felt has been manufactured, there are two main steps in making it into a hat. First, the material is shaped into a large, loose cone, or hood, by repeated stretching and moistening. The hood is then shrunk and shaped into the shell, which is then turned into the finished hat some thirteen steps later. 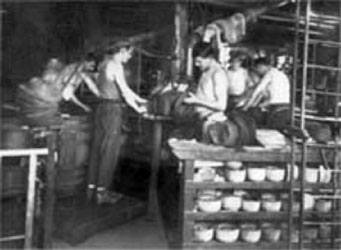 After sanding, the sweatband is installed, a process that requires great precision. There can be no lumps or irregular lines to the sweatband; it cannot leave red marks on the customer’s forehead; it should grip the customer’s head just tightly enough so that the hat will stay on in a mild to medium breeze; and the band itself cannot be too thick or it will distort the set and shape of the brim and crown. The quality of the leather for the sweatband is also a very important factor. Because it is the only part of the completed hat that touches the head. It is imperative that the leather be soft, well-fitted, and absorbent, or the wearer will never fully enjoy the hat. Most hat leathers are made from Sheepskin and lambskin. These skins are imported to the United States from around the world, with the majority coming from Argentina and New Zealand.